The world’s recycling crisis may have been one of the biggest let downs of last year, but the global community has decided to step up. Using the diplomatic channel of global governance, world leaders have resolved to update the global policy on plastic waste imports and exports. But before we dive into that solution, let’s step back and take a look at how global governance works and why it’s an effective means for dealing with global environmental dilemmas. 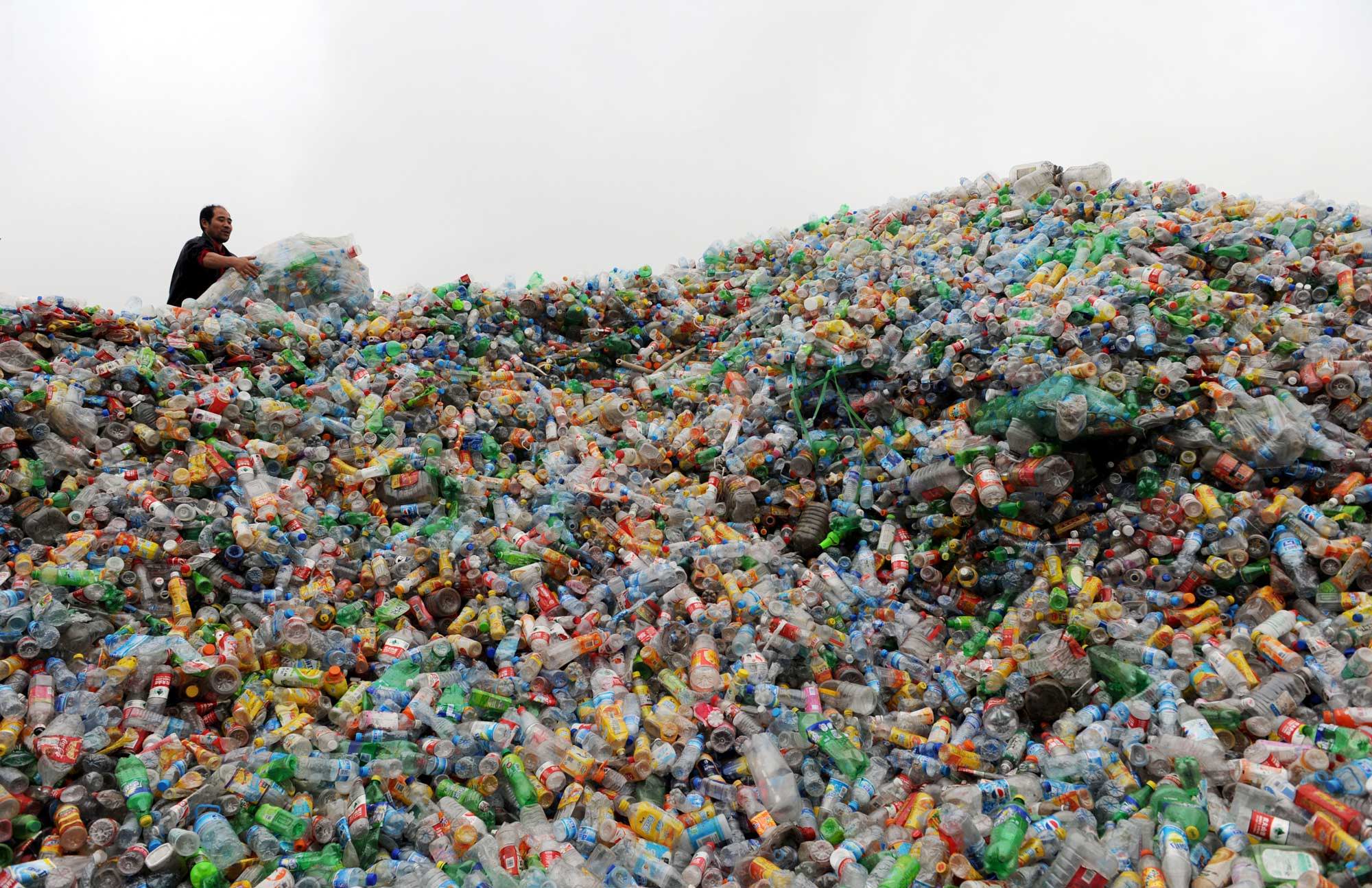 What is global governance?

We live in a world shaped by global trade and movement across borders with the flow of people, money, ideas and resources. With this movement arises a range of shared problems that require shared solutions across borders.

Governing this movement and its related effects remains a complicated issue for nations around the world. On one hand, nations exercise their right to sovereignty, meaning countries decide what’s best for themselves. On the other hand, weneed agreement between governments and other non-state international entities such as organizations, corporations and institutions to prevent unfair cross-border situations from arising. This is where global governance comes in.

Not to be confused with “government,” global governance has no “teeth.” It doesn’t have the authority to enforce laws beyond the capabilities of governments’ own legal bodies (with a few exceptions). No overarching legal system commands nations. However, global governance does help manage problems in a way that relies heavily on cross-border agreement and cooperation in enforcing shared sets of rules. Global governance can include measures like treaties, policies and incentives to align shared interests around the globe.

How does global governance work?

Instead, global governance often takes place through means such as initiatives, treaties, public-private partnerships, certifications, or multi-stakeholder partnerships. These may be aided through intergovernmental organizations or other third parties designed to provide mediation, networks in which information can be shared, participatory governance in which nations opt in to sets of shared norms and rules and a wide range of other means to govern.

At any given time, more than one governance strategy may be simultaneously employed. In that case, the goals of each form of governance are rarely synchronized. They may even defeat the purpose of other types of governance. Even though global governance can prove a messy and cumbersome aim, it nevertheless improves cohesion among different global entities.

Why is global governance important?

As globalization intensifies, we face manytransnational challenges as well as opportunities. Global governance makes engaging in the international community possible with less conflict and chaos. It can also help to recognize and accommodate the differing circumstances and capabilities of specific regions or countries. Finally, global governance improves global systems of accountability, reporting and transparency.

This is not to say that global governance does not give rise to problems of its own. Imbalances of power among different entities, uneven application of governance principles and the layering of similar rules can occur. In spite of these challenges, the consequences of not achieving global governance amount to greater risks and more unpredictability on the international scene. This brings to the fore the delicate web of interdependencies that underpin our global systems.

Why does global governance matter for the environment?

Whereas the flow of people, materials and goods can more or less be controlled by governments, the flows of climatic shifts, severe weather patterns, air and water pollution, diseases and other environmental impacts cannot easily be controlled. Therefore, issues related to the environment require greater collaboration and agreement around the globe.

Certain global environmental issues may also be seen as “threat multipliers,” such asclimate change. This means it not only creates sea-level change as a direct consequence, it also increases the likelihood of related threats to occur such as economic losses, food and water shortages, mass-migration and global security threats. Therefore, the Paris Climate Agreement stands as an important measure to establish consensus for global governance related to climate change. The global recycling trade likewise involves nearly all countries in a complex web of interdependence.

How recycling relates to global governance

One of the biggest problems with the global management of recycling scrap is the level of plastic that flows into the world’s oceans. Once plastic reaches the ocean, it eventually breaks down into microplastic fragments that enter the food pyramid. So much plastic waste has entered the natural environment of the ocean that we’re now eating microscopic plastic pieces when we consume table salt and seafood. Ocean plastic also hasdevastating impacts on the marine life of oceans.

Most of this ocean plastic flows from just ten rivers around the world and over half of these are located in China. Yet, the problem doesn’t stem from China alone. China took inhalf of the world’s plastic imports since 1992. Many developed nations traditionally relied on China to process their plastic recycling. Oftentimes, the quality of the material sent to China fell far below the level of cleanliness needed for recycling processing machines.

When China abruptly changed its recycling policies in 2018, several consequences occurred. The countries exporting their waste to China suddenly lacked a market to process their recycling scrap. This exposed the vast amount of recyclable materials sent to the developing world by the developed countries and its level of contamination. And because recycling and scrap exports get sent to countries that lack strong waste management systems, very little recyclable plastic actually gets recycled once it has been exported.

Finally, developed countries now face difficulties finding available markets for their recyclable materials, especially for plastics. So they, too, have often opted for placing these materials in landfills. Strong weaknesses in the global system of recycling have come to the fore. Global governance could help account for these weaknesses and improve the situation worldwide.

What global initiatives will help solve the ocean plastic problem?

Recently 187 countries signed aglobal waste trade agreement that requires consent for wealthier countries to send plastic waste to poorer countries. Under the amendment, “Exporting countries – including the US – now will have to obtain consent from countries receiving contaminated, mixed or unrecyclable plastic waste,” according toThe Guardian. The U.S., however, is not party to the agreement, so it could face even greater hurdles working with developing nations. Countries will now have to take more responsibility for monitoring and tracking plastic waste that they ship elsewhere.

The agreement came into force as a legally-binding amendment to the Basel Convention, which is a global governance measure that controls the movement and disposal of hazardous waste across borders. At the same COP, changes were also made to the Stockholm and Rotterdam conventions also relating to the intergovernmental handling of chemicals and persistent organic pollutants (POPs).

Other measures to stem the tide of waste have less of a regulatory nature. Incentives for industry leaders to invest in recycling infrastructure in South East Asia are led by Circulate Capital, an international organization that aims at preventing ocean plastic through investment strategies. The European Commission likewise made an increased push to improve its recycling infrastructure. The World Bank also recognizes recycling as an important industry with lots of potential, since recycling collection can provide job opportunities for people in developing countries.

How do other countries recycle?

Recycling policies for collection and processing vary widely from place to place. The amount of recycling that can get processed depends heavily on the amount and quality of the collected material, the processing facilities available in a given area, the cost-benefit feasibility of funding a recycling program and the market for recycled materials. Let’s explore how these elements play out in different countries around the world.

Which country is the best at recycling?

Germany has one of thehighest recycling rates in the world, recycling 68 percent of its disposed material. ItsGreen Dot recycling program is largely responsible for this success. Germany initiated the program in 1990, faced with a lack of space in its overburdened landfills. Germans have a multiple-stream recycling system that is easy to follow, based on color-coded labels and bins. Glass, paper and plastic each have separate bins, for instance, which minimizes contamination.

Germany also uses state-of-the-art machines that effectively sift through the materials brought from the bins with a series of conveyor belts, fans, and magnets that push, pull, blow or drop heavy, lightweight, metal and glass materials into different streams. The hard-to-sort plastics are even sorted by lasers. Effective sorting helps improve the supply for the recycling processors, ensuring a steady, clean stream of material.

In addition, Germany regulates the manufacturing side of production, to ensure that companies pay to recycle or dispose of their packaging materials. This way, companies have an incentive to minimize unnecessary packaging. This financial responsibility helps the government pay for its sorting and processing facilities. Lastly, the program comes with a satisfying guarantee that new products are made from recycled material.

What happens when countries don’t recycle?

Beyond the difficulties of environmental pollution caused by single-use plastic, hard-to-recycle material impacts both rich and poor countries negatively. However, people incountries lacking waste management infrastructure tend to suffer the most.

These communities have to either burn or trash the material that cannot be recycled. Waste pickers who work in the disposed materials often get exposed to malaria-carrying mosquitoes and bacteria. They also breathe unhealthy fumes, especially if they work near trash incineration plants. The situation is so unhealthy that between 400,000 and 1 million people die each year from causes related to mismanaged waste.

The amendments to the Basel Convention put the choice to accept foreign plastic waste in the hands of countries where garbage has piled up after China’s crackdown on recycling imports. With improved investment in waste management infrastructure, some of these problems could be solved.

Which countries export versus import garbage?

On the whole, developed countries tend to export recycling scrap to countries where the labor costs are cheaper. Countries with some of thehighest exports of waste to China before the ban included the U.S., Japan and Germany, in spite of its own high recycling rates.

Countries that find imported waste on their shores include South-east Asian countries such as India, Hong Kong, Taiwan, Vietnam, Indonesia, Thailand and Malaysia as well as Turkey. However, some of these countries have severely cut down on the amount of recycling scrap they will accept. Meanwhile,electronic waste andlow-grade second-hand clothing often ends up in least developed countries like those in Sub-Saharan Africa.

Is global governance enough to fix our recycling crisis?

Following the recent changes in global governance regarding plastic waste, one thing is clear: one person’s waste is not always another person’s treasure. It is also evident that exporting waste to developing countries only exacerbates global environmental problems, because these countries don’t have the means to prevent the flow of plastic pollution into the ocean.

Global governance can certainly promote improved investment, trade relations and recycling systems, but at some point, this may not be enough to handle the level of plastic material produced in the world. At some point we’ll have to curb the flow of new plastics and opt for extending the life of our products and opting for reusable containers and packaging.

The easiest way to help stem the flow of single-use plastic into the ocean is to start at home. With our insulated stainless steelCurve bottle, which you can reuse over and over, you can greatly reduce the amount of plastic you use at home. Take your favorite drinks to go, and take action and commit to reducing your plastic waste this year.