Ocean reefs have inspired scenes from movies like Disney’s The Little Mermaid and Finding Nemo. Dubbed the “rainforests of the sea” healthy coral reefs are teeming with life. But these days, they’re increasingly turning into pale, frozen ghost towns.

Reefs support a quarter of all marine species in just one percent of the marine environment. The most colorful regions of the sea, the sea life living in reefs--fish, turtles and algae--has exquisitely unique biological traits and vibrant diversity.

The sobering reality is that these beautiful aquatic environments are dying in coral bleaching events. Global water temperatures have risen and the reefs can’t survive in these warmer waters. They change colors, turning a shocking white color in bleaching events before all of their life supports fail, and they turn a dull beige color.

So many reefs have died that scientists have started to contemplate a future without them. And they can’t merely “grow back” in 15 years. These beautiful underwater ecosystems are the result of about 500 years of growth. It’s a fate we must do everything to prevent from happening. 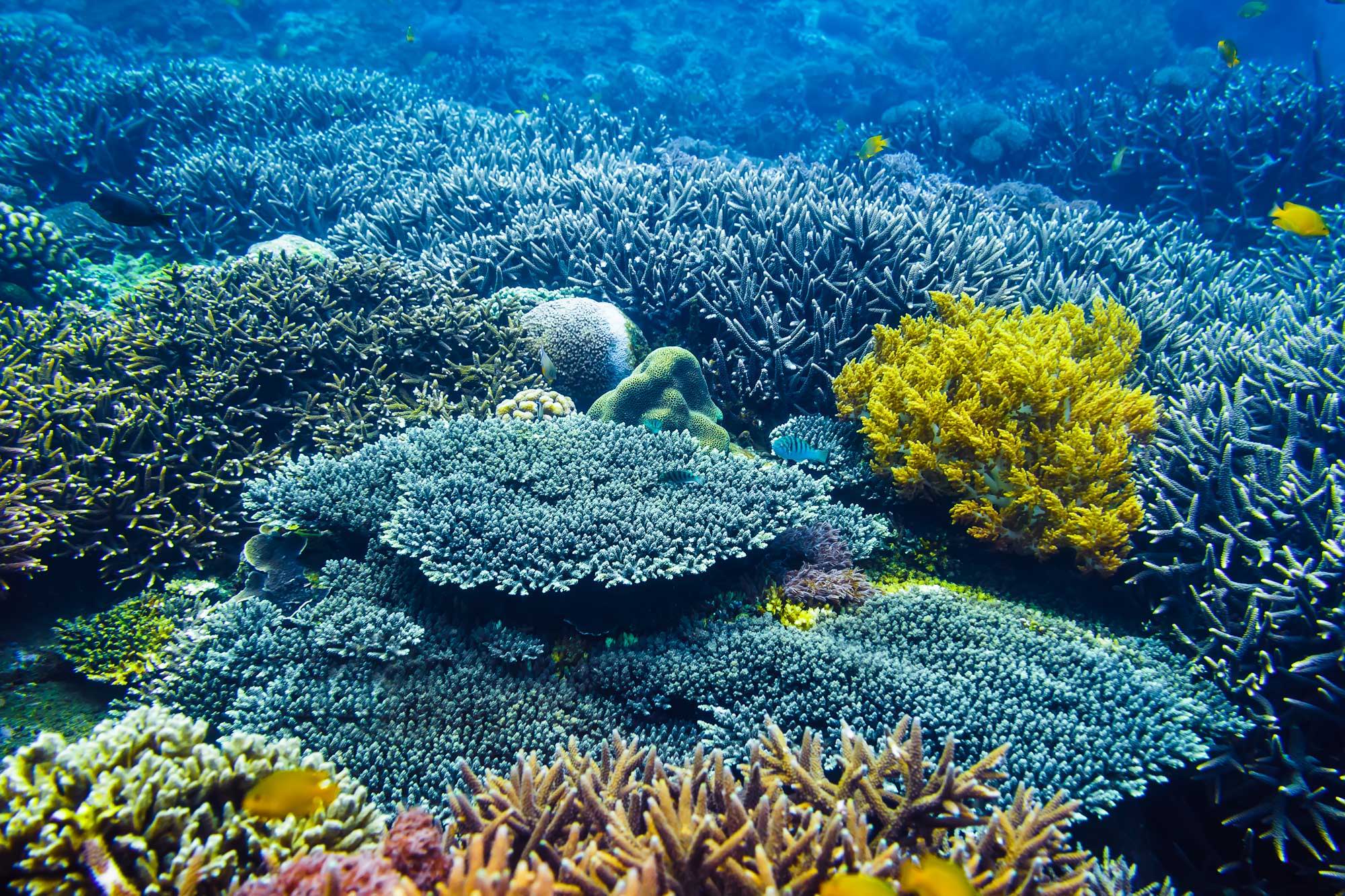 Our tragic loss of coral reef

Brace yourself. What you’re about to read isn’t pretty, but it needs to be read and shared to make an impact.

Here are some of the latest facts about the global coral bleaching events:

These facts should not be taken lightly. Coral reefs support more than 800 hard coral species and more than 4,000 species of fish, a quarter of all the world’s fish.

Why are coral reefs important?

The consequences of losing all coral reefs range from the everyday--people living near the ocean will lose their livelihoods--to the catastrophic--the ocean’s function of producing the very oxygen we breathe could break down.

Coral reefs are considered one of the most high-value ecosystems. Scientists estimate that every square kilometer of coral reef provides an economic benefit of roughly $100,000 to $600,000. Let’s examine the various benefits we’d lose if all coral reefs die.

As a broader phenomenon relating to ocean health, the coral reefs play an important role in creating the conditions that allow our oceans to produce oxygen. This oxygen not only gives life to the sea creatures underwater, but also to all creatures on land, including us. As much as 85 percent of the air we breathe comes from marine plants. The volume of ocean water that no longer holds any oxygen (or life) has increased fourfold in the past 50 years and the overall amount of oxygen in the ocean is down two percent.

Half a billion people all over the world benefit from the products and food that derive from the coral reefs, yet some people directly rely on them for their occupations. This is especially true for the people living on the coasts of Indonesia, Thailand, Philippines, Mexico, Australia, Japan and Saudi Arabia. Without coral reefs, people working in the fishing industry would lose their jobs.

Coral reefs provide tourist attractions in a hundred different countries and regions, where divers and snorkelers enjoy observing marine life. Without coral, coastal tourism would drop by an estimated nine percent accounting for a loss of about $36 billion dollars in revenue.

The coral reefs are a rich source of pharmaceutical ingredients. Researchers believe we have a 300 to 400 percent higher chance of developing drugs from coral reef ecosystems than from places on land.

Reefs protect coastal regions from the force of the ocean’s waves. They reduce the strength of ocean waves by 97 percent. Without the reefs, 62 million people living in coastal regions near coral reef would face property damage risks and other dangers from strong waves.

Why are coral reefs dying?

Reefs have a limited range of water temperatures that they can survive in, so as global temperatures rise due to climate change, they undergo a process of bleaching that shows they are overheating and distressed.

The coral live in a symbiotic relationship with algae that live in their tissue. But when temperatures rise too high, they purge this algae, causing them to “bleach” or turn white. However, this algae also feeds them, so they starve without it and become more susceptible to disease, algae and death. They also avoid reproducing, because of their critical state.

What causes coral reefs to die?

Scientists agree that climate change is the main factor leading to coral reef deaths. As fossil fuels warm the planet, the ocean absorbs the heat as part of its regulatory function. Ninety percent of the added atmospheric heat has been absorbed by the ocean. This causes both coral bleaching events in which coral become more susceptible to disease, algae and death.

During bleaching events, coral also avoid reproducing, because of their critical state. Scientists have observed an 89 percent decline in baby coral following the mass bleaching events in 2016 and 2017 in the Great Barrier Reef.

While not entirely distinct from climate change, the changing temperatures in the atmosphere have upset the pH balance, because the ocean absorbs more carbon dioxide. This causes the water to become more acidic. The rapid acidification contributes to coral bleaching events.

In addition to climate change, pollutants in ocean waters also disturb the coral reefs. One of the most common forms of pollution that harms coral is nutrient enrichment. This stems from an excessive influx of phosphorus or nitrate run-off into the ocean from agricultural fertilizer, storms that upset manure lagoons and other waste water sites, industrial pollution, and even household products.

As the phosphorus and nitrate balance in the water changes, toxic algae blooms occur. Too much algae affects coral by blocking their pores, blocking light, and making coral less disease-resistant.

A variety of other risks can also impact coral: anchor damage, overfishing and harvesting near coral, dredging of the ocean floor, cyclones, diseases and population explosions of organisms that eat coral.

How can we save the coral reefs from dying?

Unless we can stabilize global climate temperatures by greatly cutting back on greenhouse gases, there’s not much hope for coral. However, scientists are developing solutions that aid the regrowth of coral to improve their chances of resilience, given lower ocean temperatures.

Scientists in Florida are fragmenting and harvesting coral in nurseries, since coral can reproduce by cloning themselves. Almost 90 percent of coral species are farmed this way around the world. As they grow, scientists attach the new polyps onto the damaged reefs. This process speeds up the rate of coral growth substantially. However, this process eliminates important genetic diversity that occurs when coral reproduce in pairs.

Coral have the capability of reproducing sexually, which leads to genetic diversity, when they release sperm and eggs into the water. Scientists are synchronizing the coral spawning times with restoration assistance. The scientists help by transferring baby coral to protected zones where they won’t face the risk of being eaten and later replanting them.

Other efforts to help coral include genetic modification to become stress-resistant, lab-breeding followed by replanting in the wild and super-gene inducing pressures, to bring out the necessary genes capable of resisting stressful conditions.

What makes coral reefs worth saving?

Can you imagine miles and miles on end of miraculously complex, three-dimensional dreamscapes that have evolved over centuries? Coral reefs are recognized in 29 World Heritage sites across the world, because they truly are marvels to witness.

That’s why the eerie effect of coral bleaching events strikes a chord of profound loss. After a recent dive, Laurie Raymundo recalls how the emotional impact of her work hit her. She cried for an hour after seeing the extent of coral bleaching in Guam’s Tumon Bay.


Where are coral reefs located?

Coral reefs are found off the coasts of 100 countries and regions in the world. They mostly live between the Tropic of Capricorn and the Tropic of Cancer, close to the equator. They span roughly 110,000 square miles under water.

The largest coral reef in the world is the Great Barrier Reef near Australia, extending 1,553 miles. It can even be seen from space. The second largest reef is in the Red Sea near Egypt and the corals there have the rare ability to withstand higher temperatures. In third place for the largest coral reef, the New Caledonia Barrier Reef inhabits the Pacific Ocean and it is listed as a UNESCO World Heritage site for its rich biodiversity.

Types of coral reefs and species living near them

Corals come in two main types: hard and soft. A stiff limestone skeleton gives the hard coral a stony appearance. They grow in round, branching or flat formations. Soft corals have a more delicate appearance, growing in spirals or tree-like formations. Some of the oldest coral, stony coral, have existed for 240 million years.

The interconnected web of life has a complex food chain complicated by the mutual protections some species provide. Predators like sharks and grouper fish keep smaller fish populations in check. Parrot fish eat coral, while cleaner fish and shrimp eat parasites on other fish. Marine worms filter the water, snails graze on algae and sea stars eat the snails. Crabs and sea cucumbers sweep the sea floor as scavengers.

As for protection, sea anemones and crabs protect one another, while sea squirts, salps and mollusks filter the water by eating phytoplankton. Nearby sea sponges provide safe places for crustaceans and young fish as well as barnacles and small mollusks. Meanwhile, nudibrands, sea stars, turtles and fish feed off of the sponges.

With so many beautiful life giving interconnections centered on the coral reefs, the loss that coral bleaching represents goes far beyond a single-species issue. Coral reefs are vital connection builders, impacting both life in the ocean and on land. They’re too important to risk losing for good.

Love the ocean as much as we do? Shop our popular ocean-themed water bottles. By drinking from a refillable bottle, you'll help stop ocean plastic and save sea life.

Dennis, B. (2016, November 9). Why the death of coral reefs could be devastating for millions of humans. Washington Post. Retrieved from https://www.washingtonpost.com/news/energy-environment/wp/2016/11/09/why-the-death-of-coral-reefs-could-be-devastating-for-millions-of-humans.

Loria, K. (2018, January 5). The world's oceans are in even worse shape than we thought. Business Insider. Retrieved from https://www.businessinsider.com/new-studies-show-oceans-losing-oxygen-rapid-coral-bleaching-2018-1.

Queensland Museum. (2019). Human Impact on the Reef: Pollution and Other Factors. Retrieved July 30, 2019, from https://www.qm.qld.gov.au/microsites/biodiscovery/05human-impact/pollution-and-other-factors.html.

Sharma, U. and Reilly, K. (2018, April 23). The terrible things that would happen if all the coral reefs died off. Business Insider. Retrieved from https://www.businessinsider.com/what-if-all-coral-reefs-died-off-2017-12