What is Fast Fashion and Why is it Bad?

If there’s one thing today’s world is hungry to consume, it’s fashion. To keep up with demand, fashion brands are quick to overstock stores and satisfy shoppers’ whims. After that, they’re just as quick to throw their collections away to make room for the next “micro-season.” That’s how fast fashion operates in a nutshell.

The global population has roughly doubled since 1970, but the growth of fashion has outpaced this growth several times over. With an annual consumption of about 80 billion new pieces of clothing around the world, a 400% increase since 2000, we are not just outfitting the population. The effects of this insatiable appetite for fashion have extreme impacts on people and the environment. Let’s explore how fashion sped up to its accelerated state. 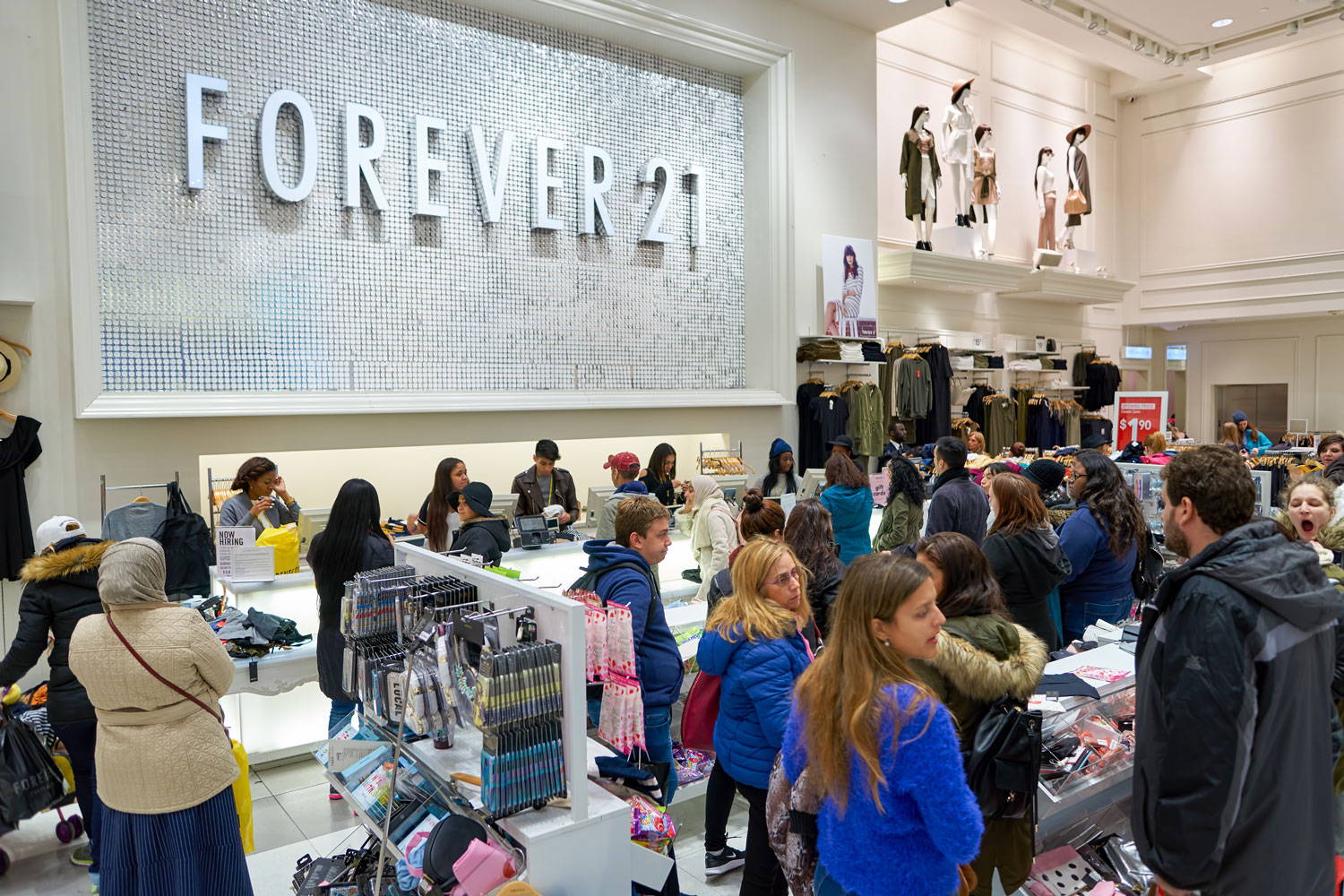 WHAT'S THE DEFINITION OF FAST FASHION?

Fast fashion has three main components from the consumer’s perspective: it’s cheap, it’s trendy and it’s disposable. It makes purchasing clothes on impulse easy and affordable. Shoppers are encouraged to update their wardrobes regularly throughout the year to keep up with ever-changing trends.

From a business perspective, fashion’s growth depends on higher production and lower production costs. It surpasses the classic seasonal collection output by far. Instead of collections coming out four times per year, some fast fashion brands introduce new trends that mimic catwalk styles on the sales floor as often as several times per week.

Fashion has been accelerating since the industrial revolution with the invention of the sewing machine. As a result, ready-made clothing became popular. Ready-made clothing offers various clothing items in a range of sizes for us to choose from. This allowed the middle class to access fashion more affordably. However, homemade and custom dressmaking and tailoring still remained common until about a century later.

Mass clothing production vastly expanded from the 1960s to the 1990s and labor and textile production were outsourced to the developing world. Manufacturers sought the cheapest labor and materials, while the demand for affordable clothing remained high. Around this time, clothing manufacturers started to shorten their pace of production and update trends faster than just four times per year.

In the 1990s, fashion supply chains developed new production models to become as “fast” as they are today. Fashion retailers continued to cut costs and increase the pace of collection output. Today, it’s not uncommon for stores to produce weekly “micro seasons” that introduce about 52 collections per year. With such a dizzying speed of production, there are bound to be consequences.

While the most fashion is consumed in the U.S., 90 percent of the world’s clothing is produced in low- and middle-income countries. Each day, 40 million workers endure poor working conditions and earn unfair wages to assemble garments.

For instance, garment workers in Bangladesh who make about $96 per month don’t make enough per month to afford basic needs. While the majority of garment workers are women from the ages of 18 to 24, a number of countries have been implicated in both forced and child labor including Argentina, Bangladesh, Brazil, China, India, Indonesia, Phillippines, Turkey, Vietnam and others according to a 2018 U.S. Department of Labor Report.

Beyond compensation, life-threatening health standards and workplace accidents remain major concerns for garment industry workers. Workers regularly breathe in dust and fiber from the textiles due to poor air-flow in working spaces. This causes garment industry workers to suffer from lung disease, cancer and reproductive issues. The work is also repetitive, which adds additional physical strains.

Workers also face the risk of severe factory accidents such as the tragic collapse of the Rana Plaza factory, which killed 1134 garment industry workers in Bangladesh and injured many more. This accident stands out as a turning point for fast fashion. Following the event, many people in the developed world started to speak out against the unfair treatment of workers.

For instance, Fashion Revolution, a global organization that spreads awareness about fashion’s unsavory business ethics, cites the Rana Plaza factory accident as its original inspiration. Like other organizations fighting for change in fashion, Fashion Revolution seeks change both for people and the environment.

Fast fashion has an enormous environmental footprint for both its production and disposal.

Clothing production requires a considerable amount of energy and resources, while it depends on toxic fabric dyes and other chemicals that contaminate fresh water.

Fashion produces a tenth of the world’s carbon emissions. According to Levi Strauss & Co., producing a pair of jeans emits as much carbon as driving a car 80 miles.

But fashion has an even more staggering impact on freshwater supplies because the same pair of jeans would require 2,000 gallons of water. Textile dyeing produces 20 percent of global wastewater, the second most polluting industry for water. This wastewater is released directly into rivers and streams, raising the risk of exposure to heavy metals for both people and animals in the surrounding areas.

Agricultural crops are the other environmental concern on the production side of the equation. Non-organic cotton, one of the most commonly sold fabrics, depends on intense water and pesticide use.

On the disposal side of the life-cycle of clothing, huge amounts of waste are produced. Every second, enough clothes to fill a garbage truck full is either burned or sent to a landfill. Some companies, such as Burberry, have also come out about their standard practices of burning unsold garments at the end of a season to eliminate the discount market of their clothing.

We’re simply wearing our clothes for a shorter period of time. In 15 years, we’ve reduced the number of times we wear clothes by 36 percent. Annually, wearable clothing worth $460 billion is thrown away, according to the Ellen MacArthur Foundation. Each American throws away 80 pounds of clothing per year on average.

The other issue with wasted fabric is that the cheap polyester textiles used in so many fabrics are releasing microfiber plastic into the waterways each time we wash them. Non-biodegradable microplastics have entered the food chain and human water supplies, posing a still unknown overall risk to human and species health.

If you want to address the core issues of social and environmental sustainability, you’ll have to think carefully about the price, materials and production of the garments you buy.

There are several approaches you can take when you shop for clothes:

What’s the best fashion accessory for a sustainable fashion look? We suggest completing your outfit with a reusable beverage container. Browse our designer collection to choose one that you’ll love for years.

Fashion Revolution. (2019). Why do we need a fashion revolution? Retrieved July 29, 2019, from https://www.fashionrevolution.org/about/why-do-we-need-a-fashion-revolution/.

Levi Strauss and Co. (2007). The Lifecycle of a Jean. Retrieved from http://www.levistrauss.com/wp-content/uploads/2015/03/Full-LCA-Results-Deck-FINAL.pdf.

Rauturier, S. (2018, August 7). What is Fast Fashion? Good on You. Retrieved from https://goodonyou.eco/what-is-fast-fashion/. What

Stanton, A. (n.d.). What is Fast Fashion, Anyway? The Good Trade. Retrieved from https://www.thegoodtrade.com/features/what-is-fast-fashion.

The University of Queensland, Australia. (n.d.). Fast fashion quick to cause environmental havoc. Retrieved from https://sustainability.uq.edu.au/projects/recycling-and-waste-minimisation/fast-fashion-quick-cause-environmental-havoc.